Disney
July 2010 edited November 2010 in Philosophy
Mdm Hsu Chih has voluntarily taken Triple Jewel and 5 precepts from Master Venerable Chin Kung, who has graded her a perfect score of 100 percents for 5 precepts. She is a very good living example for many buddhists and worldly beings to learn from her

http://en.wikipedia.org/wiki/Teresa_Hsu_Chih)
She has been a vegetarian all her life. She takes only one meal a day - mainly raw vegetables and fruits, which she blends and drinks as a juice. She believes cooking spoils the nutrition. Drinking this juice has been her daily habit since 1947. In this , she was decades ahead of medical opinion. Recent scientific research has discovered such a diet is rich antioxidants,which are life-strengthening substances that prevent diseases and slow down ageing.

Daily meditation is " as important as a healthy diet".A peaceful mind is the foundation of good health,she says;" i never time myself - i just meditate until i feel really drunk on peace" 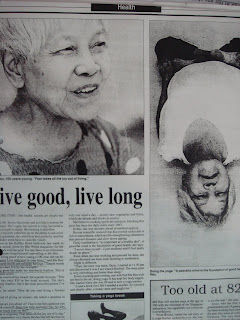 A 10 -years old newspaper clipping from Borneo Bulletin featured on Mdm Teresa Hsu Chih at 100-years-young. She had a specially interview coverage by CNN and received an award given by Her World magazine at the same year, for her lifetime work with the poor. For her ,there is no retirement.

This is a short summery from that clipping. The Amazing Mdm Teresa Hsu Chih always been my mentor.

The reporter found himself marvelling at her. She 's living proof of how young a 100-year-old can be.

" Be good.Live with love in your heart,"said Hsu Chih " Avoid harsh words and unhappy feelings." Simple words - do others dare live by her example?"

Doing good has made her absolutely fearless.This is her ultimate secret.

As she recieved her award , the reported thought."This woman has only $39 in her bank account.Yet she 's completely fearless.She's the most powerful person i 've ever met."

Later he asked ;" How do you start living a fearless life?"

Instead of giving an answer, she asked a question in turn."What are you afraid of?That is the first question you must ask yourself. Does fear help anybody?No,So why spend so much time on fear?"

"Fear is crippling. Fear takes all the joy out of living."

Mdm Hsu Chih begined each day at 4am. She credited her youth to a simple lifestyle. She has been a vegetarian all her life. She takes only one meal a day - mainly raw vegetables and fruits, which she blends and drinks as a juice. She believes cooking spoils the nutrition. Drinking this juice has been her daily habit since 1947. In this , she was decades ahead of medical opinion. Recent scientific research has discovered such a diet is rich antioxidants,which are life-strengthening substances that prevent diseases and slow down ageing.

Daily meditation is " as important as a healthy diet".A peaceful mind is the foundation of good health,she says;" i never time myself - i just meditate until i feel really drunk on peace"

Even when she was working and pressed for time, she always devoted one hour each morning to meditation. Night is different. " Then , the time was mine. Once , I started at 11:30pm and discovered it was 5 am when i finished. The deep quiet is very refreshing and better than sleep."

Every morning and evening , one will find her with her feet in the air, doing yoga.it has kept her body supply. She started when she was 69 and is now a yoga teacher. 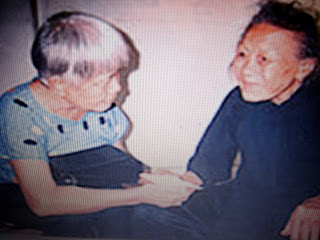 Lately , I received a forward mail featuring on this amazing woman at 110 years from my sister , and it seems everything about her still remained likes 10 years back.

She is 110 years old this year ( 2009 ). Small built and agile, she has grey hair , excellent hearing , and eyesight. She is one compassionate person who has helped others her entire life. For one century , she has been dedicating herself to others selflessly, unconditionally loving others, and especially caring for those who are poor , sick , old and suffering. As she puts it:" I did not come to this world alone. I have many companions and it is my responsibility to help them. I love them without any terms and conditions because we are a family. Even today , she still helps at the old folk home.

Learning yoga at the age of 69

Everyday she wold meditate , read , exercise , do charity , and do yoga. Her energy level and physical condition is comparable to the young people. This is especially true when she demonstrates the yoga movements with her soft and flexible limbs;seeing her moves her body makes one hold one's breath and grasp in admiration. She revealed the secret of her longevity as to work every day that she wakes up , to work without hesitation, and to be the voluntary worker of the society. At the same time she is careful not to speak ill words, not to be unhappy , and not to eat food cooked with strong fire; she refrain from meat , coffee , tea and alcoholic drinks. That is how she remains serene and joyful all the time, both physically and mentally.

She started learning yoga at the age of 69 and she talked about the wonderful experience of how her 'dreams came true ' in learning yoga.

one day , as she was reading ,something she loves to do very much , she read about the goodness of learning yoga.But what is yoga? she was not quite sure." How i wish someone would explain what yoga is to me and teach me yoga," she made a wish in her heart.

And the strangest thing happened. A few days after she made the wish to learn yoga , a man came to visit her old folks' home. He wore an orange long shirt and an orange hat.

As though the goddess has heard Hsu Chih's prayers and sent the yoga teacher to her. Since then , she started to learn and meditation from the teacher.

With yoga ,her body that was already healthy became even stronger and her energy level also became better. Of course , the good effort of dedicating herself to the poor and sick itself would harvest her the good karma of having a healthy body and a long life. 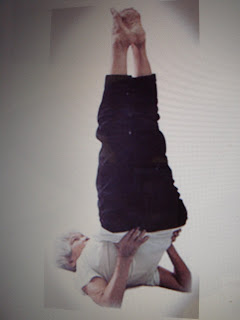 She demonstrates the Shoulderstand 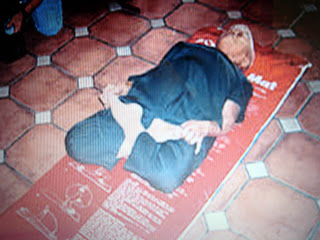 She demonstrates the Fish pose in Lotus pose


Teresa Hsu (b. 1898, Swatow, China - ), whose full name is Teresa Hsu Chih, is one of Singapore's most prominent and oldest social workers. The super-centenarian, who began devoting her life to helping the poor and destitute in the 1930s, has remained tireless in her humanitarian work even after turning 100. She is recognised not only for her unstinting contribution to society but also for her positive attitude towards life.

Early Life
Hsu was born into dire straits. Besides having to deal with extreme poverty, which sometimes meant that she had only grass to eat, she lived with a physically abusive father. After he abandoned the family for another woman, Hsu, along with her grandmother, mother and three siblings, travelled to Penang, Malaysia by boat.

Having had to work to survive since young, Hsu had no formal education whatsoever, so she worked with her mother as a cleaner in a convent. In 1925, at the age of 27, she convinced the convent nuns to let her sit in on the children's classes - her first taste of literacy and reading, which was to later burgeon into a lifelong interest. Three and a half years later, she passed her Senior Cambridge examinations. With this qualification, she left for Hong Kong in 1933. There, she worked as a cleaner by day and learnt English, shorthand and typing by night. These skills landed her the job of stenographer.

In 1939, with the Japanese poised to enter Hong Kong, Hsu left for Chongqing, China, where she worked as a secretary and bookkeeper at a German news agency. Being close to the epicentre of the Second Sino-Japanese War provoked her into a new consciousness. She quit her high-paying job to volunteer with the Friends' Ambulance Unit, and this experience of helping injured soldiers made her decide to be a nurse.

Major Accomplishments
Hsu went to London, England in 1945 and studied nursing at the London Nursing Council. Besides working in hospitals during her eight years in England, she also joined the International Voluntary Service for Peace, travelling across Europe to help the needy and to promote peace. In 1953, she left for Paraguay as a member of the German charity group Bruderhof. She stayed there for eight years, helping to start hospitals and homes for the aged. She returned to Penang in 1961 to be with her mother. While back home, she assumed the position of sister-in-charge at the Assunta Foundation in Petaling Jaya.

In 1963, Hsu came to Singapore and became the matron of Kwong Wai Shiu Hospital. In 1965, she founded the Home for the Aged Sick, one of the first homes for the elderly sick in Singapore. It was established on a 0.6-ha plot of land at Jalan Payoh Lai that was bought with money contributed by Hsu's elder sister Ursula. Hsu also used some of the money to buy public flats for the homeless. The sisters ran the home for five years, with Ursula in charge of the finances and Hsu in charge of managing the home while also supplementing the funds by selling home-grown fruits. However, they soon found it increasingly difficult to cope with the rising number of patients and approached the Rotary Club for assistance. Members of the club agreed to fund the home, but on condition that the sisters let them run the home as well.

Since retiring as matron of the home in 1983, Hsu has continued to care for the poor in her own capacity, such as by collecting old clothes for needy families. More notably, she has continued to reach out to the needy through the Heart-to-Heart Service, a non-profit, informal direct-help service that she had established. Through this service, she visits those under her charge - usually the single elderly and needy families - and provides them with cash allowances and food. Hsu explains that this service is called Heart-to-Heart because its work should inspire people to help by appealing directly to their hearts. In 2000, it was reported that Hsu had plans to start another home to care for the aged sick and mentally unsound.

Philosophy towards Charity and Life
Social work is, doubtless, a natural extension of Hsu's life philosophy. She describes her drive to help others as instinctive, a reaction that wells up from her ability to empathise with the needy, having herself been destitute once. Moved by the generosity and kindness she has received from others, she is determined to extend her help to the poor people that she meets, calling them her brothers and sisters.

Hsu's philosophy towards life, especially one as long and fruitful as hers, is simple; positive thoughts and laughter, she has said, are her key sources of sustenance. Besides keeping her mind active through volunteer work and visiting various countries to give talks, she also keeps her body conditioned through yoga, something that she learnt only at the age of 69 and now teaches to the public. In addition to doing yoga twice a day, she meditates at 4 am daily, before taking a morning walk.
0