We all start in different places. Some places are very hard BUT that is where and who our situation is ... It is why we have compassion/empathy/non judgement. Some of us have no compassion or time for a particular dharma/expression/karmic crazy. However The Truth (remember her) comes in many forms but only one certainty. Uncertainty.

On the whole I manage to stay on the sanity side of the Middle Way but I like to cross over and take a walk on the wild side. 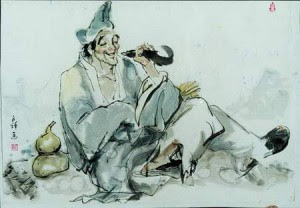